On 4th of July 2011 Otto Habsburg-Lothringen, the last Crown Prince of Austria-Hungary, died at the age of 98. After a long period of mourning he was finally buried on 16th of July in the Habsburg family crypt in Vienna (Kapuzinergruft), his heart was buried one day later in Hungary.

So much for a short historic background (if you want to know more, just pay auntie google a visit!). The funeral itself seemed to become a quite strange event, at least for me. As you hopefully know, Austria has ceased to be a monarchy in 1918. The funeral was announced to be a massive event, as big as a state funeral would have been – just that it was no official state funeral. A typical Austrian solution I would say.

Even though Austria long ago ceased to be a monarchy, sometimes you get the impression that our country secretly wishes we still had “our Emperor and Empress”. Even though I am not particularly interested in monarchy, nor wish to re-install a monarchy in Austria, I thought the funeral would make an interesting opportunity to take pictures, mainly of the people attending the funeral and the funeral procession.

The day before the funeral people could pay their tribute to the body which was layed out in the church where he also was to be buried later on. The place was already prepared for the day of the funeral with big screens where documentaries were aired. As I wanted to see how the place was set up and where the barriers would be placed, I went there and snapped a few pictures.

People queuing up to pay their references.

Liked the couple dressed in black. 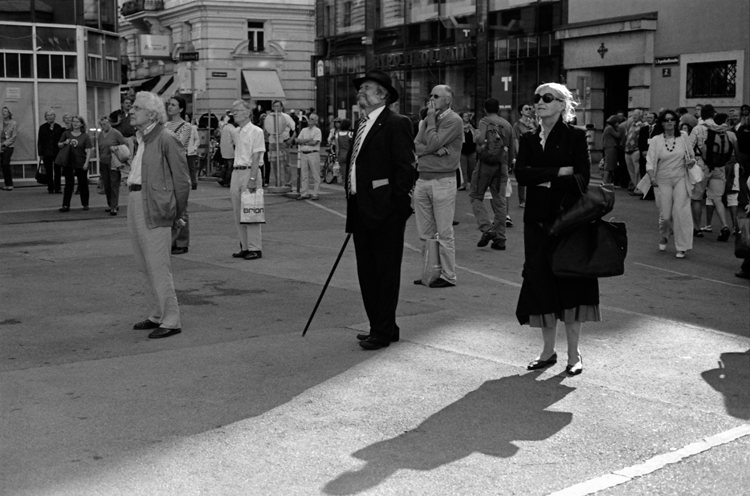 Fast forward to the day of the funeral. These two were trying to get pictures of the celebrities arriving for the requiem mass in St. Stephen’s cathedral. Wanna-be paprazzi kind of… Probably need to think of upgrading their equipment!

Really most of the pictures I took were people watching…

It was very hot, and the little one was completely exhausted.

Think these guys belong to the Order of Malta. They were lined up in fron of the church waiting for the procession to start. 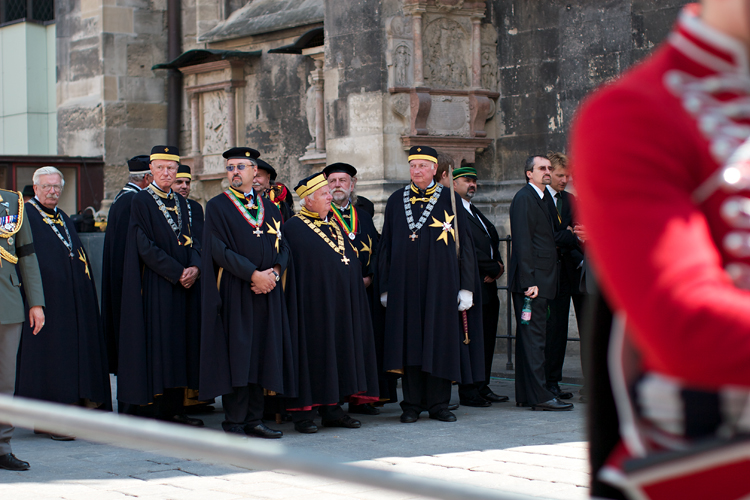 Flag with the coat of arms of Austria (mind – republic!), on the other side a picture of Otto Habsburg-Lothringen.

A tourist reading in his city guide about Austria back in monarchy era. 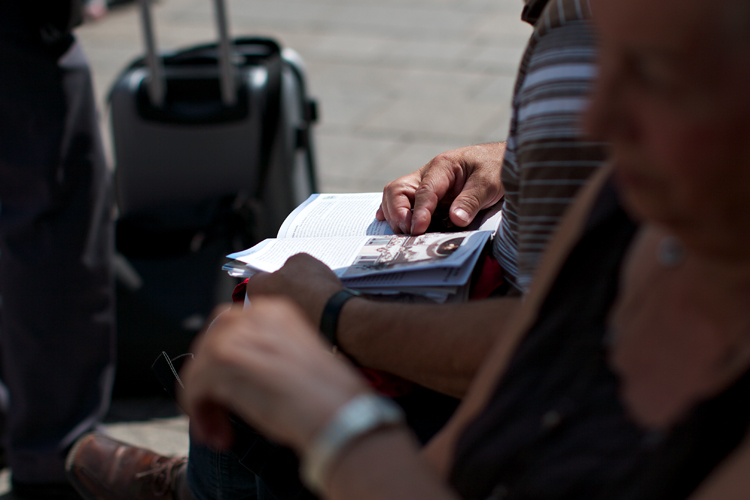 He was smiling happily, having climbed the barriers to watch the big screens, holding a Sissi flyer. 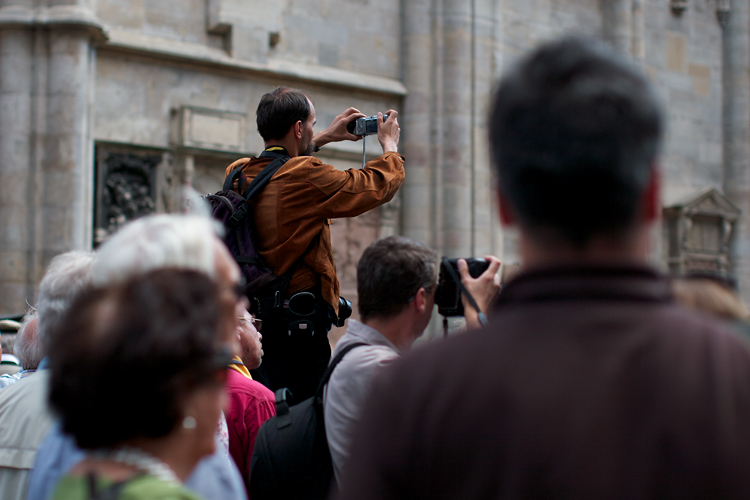 Saw this gentleman already the day before. Amidst the crowd just looking for celebrities he seemed a bit forlorn, genuinely sad.

The programme still stated Otto Habsburg’s title from back in monarchy times (which I think he was not allowed to carry in Austria! Yes, the funeral took place in Austria, Vienna…): 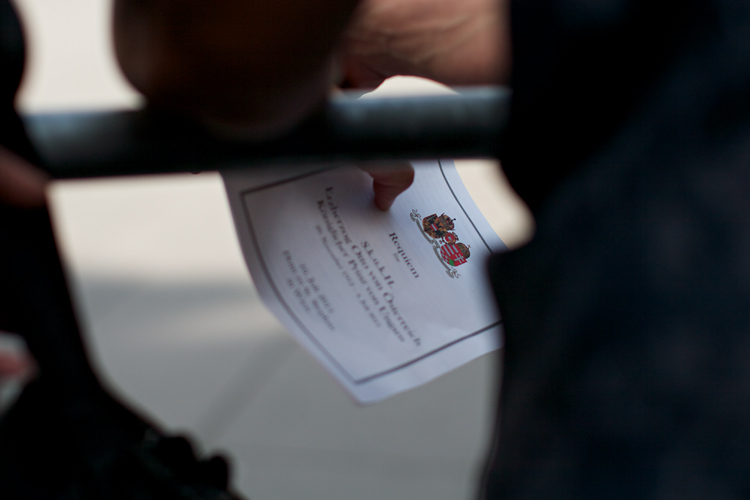 Also doubles up as sunshield or to cover your face in case someone takes pictures of you. Or whatever she was doing there…

One of my favourite shots.

Clearly bored. Not even Sissi was able to impress little doggy…

The crowd waiting for the procession.

The kids jumped up trying to see if the procession was already approaching.

Austrian armed forces – guard of honor (no, this was no state funeral!). They had taps fixed under their boots, which sounded quite funny, especially when looking into their stern faces. I always wonder if there’s somebody somewhere in this world who makes up all these funny ways of marching in step and then sells them to the different countries, as no one could come up by themselves with these quirky and really inefficient ways of moving yourself from one place to another… One of the reasons I could never join the army, I would constantly keel over from laughter with all the ridiculous stuff they come up with… (I know I wouldn’t, it’s not the best place to laugh… not much humor around there, they are always up to give people a hard time). Anyways – funny to watch!

Some of the traditional clubs, most of them had a hard time while trying to march in step… 😉

Personally I am really put off by most of these groups (“Traditionsverbände/Tiroler Schützen/Studentenverbindungen/etc. – sorry, I don’t know the correct translations for these), as they usually stand for really “tradional values”, some of them (not all of course) being friendly with right-wing ideas…

I literally felt sick in my stomach while they passed by… Don’t know, seeing these groups always creates a really oppressive atmosphere for me… So not many pictures of them… 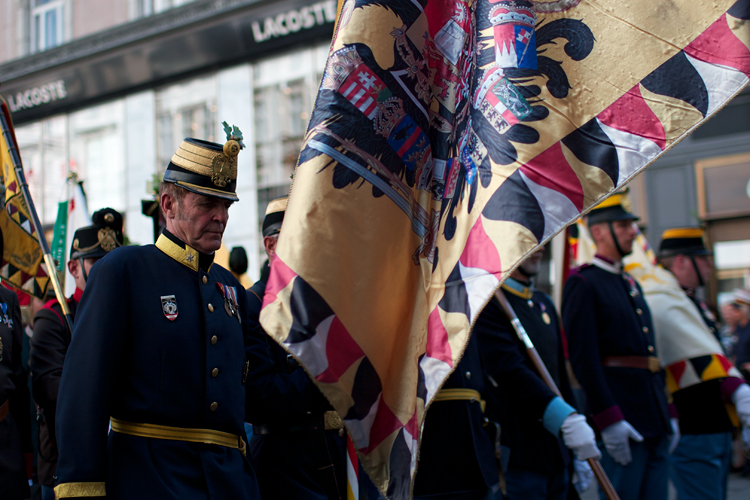 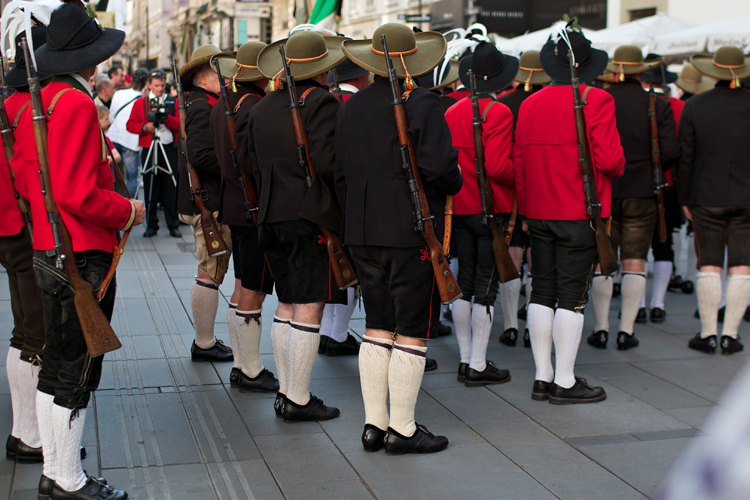 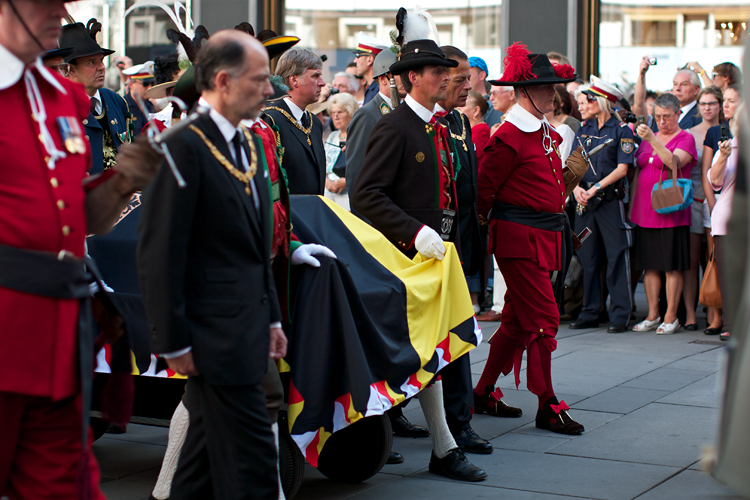 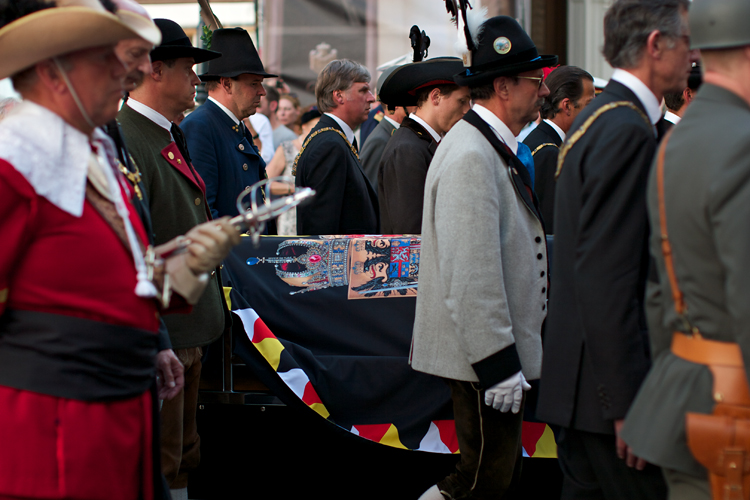 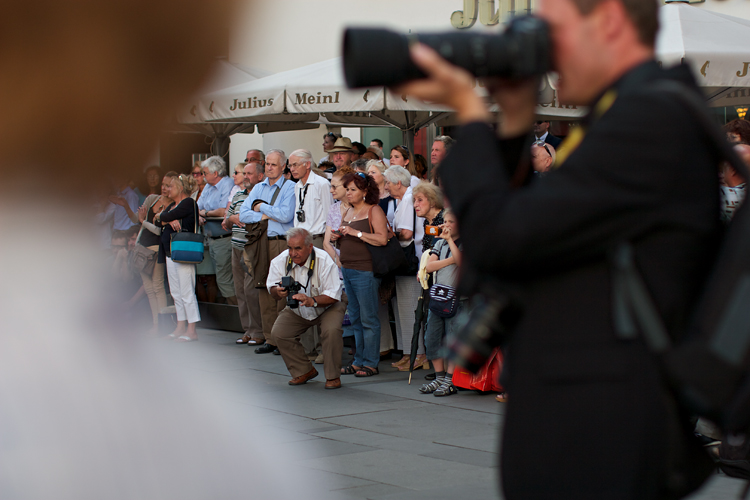 Black & white pictures taken with Agfa APX 100 in Rodinal 1+50, all the rest digital.